There are a wide variety of bacteria that can be found in drinking water, most of which pose no health hazard. Unfortunately, certain bacterium including certain strains of E.coli can cause terrible illness. Water quality reports often talk about fecal coliform contamination as a measure of bacteriological safety. While many fecal coliform bacteria are for the most part harmless, their presence in drinking water is a warning sign that the water supply has been compromised and that other harmful bacteria like E.coli or other contaminants such as nitrites or pesticides may be present. Bacteria most often enter drinking water through sewage contamination or run-off from agricultural operations. 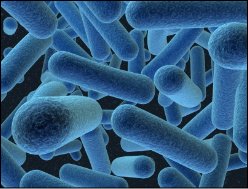 E. coli (Escherichia coli) is a type of fecal coliform bacteria commonly found in the intestines of animals and humans. There are numerous strains of E.coli, the majority of which are relatively harmless. However, E.coli strain 0157:H7 is one of the most serious drinking water contaminants, responsible for numerous North American deaths each year. The presence of E. coli in water is a strong indication of recent sewage or animal waste contamination. During rainfall, snow melt, or other types of precipitation, E. coli may be washed into creeks, rivers, streams, lakes, or groundwater.

E. coli O157:H7 produces a powerful toxin which can result in severe diarrhea (often bloody) and abdominal cramps. Frequently, no fever will be present. Symptoms usually appear within 2 to 4 days, but can take up to 8 days to appear. Most people recover without antibiotics or other specific treatment in 5-10 days. There is no evidence that antibiotics improve the course of disease, and it is thought that treatment with some antibiotics may precipitate kidney complications. Antidiarrheal agents should also be avoided.

The good news is that bacteria are effectively sterilized by ultraviolet (UV) water purification. Reverse osmosis is also effective in reducing bacteria in water, although it should not be solely relied upon if your water supply is known to be contaminated with bacteria.

Many viruses known to cause disease in humans can be carried in our water supply, including everything from the common cold to typhoid fever. While somewhat more resistant to ultraviolet disinfection than bacteria, virtually all viruses are killed by the dose of germicidal UV provided by a household ultraviolet water purifier.

Cysts are small microorganisms generally consisting of a small number of living cells (often only one). As they are more resistant to chlorination (the preferred method of eliminating most waterborne microorganisms used by municipalities) than bacteria and viruses, their larger size makes it possible to remove them with fine filters including reverse osmosis and 0.5 micron carbon block filters. They can also be effectively inactivated with ultraviolet light (UV) disinfection. The two most frequently discussed waterborne cysts that cause disease in humans are Cryptosporidium and Giardia.

Cryptosporidium (crip-toe-spor-ID-ee-um) is a protozoan, a single-celled parasite, that lives in the intestines of animals and humans. This microscopic pathogen causes a disease called cryptosporidiosis (crip-toe-spor-id-ee-O-sis). The dormant (inactive) form of Cryptosporidium, called an oocyst (O-o-sist), is excreted in the feces (stool) of infected humans and animals.

The most common symptom of cryptosporidiosis is watery diarrhea. It may also cause abdominal cramps, nausea, low-grade fever, dehydration, and weight loss. Symptoms usually develop 4 to 6 days after infection but may appear anytime from 2 to 10 days after infection.

People with healthy immune systems will usually feel ill for several days but rarely more than two weeks. Some infected individuals may not even get noticeably sick. Often, a patient will appear to be on the verge of recovery, only to get worse again. Cryptosporidiosis may cause complications for those with illnesses or conditions such as diabetes, alcoholism, or pregnancy. The effects of prolonged diarrhea and dehydration can be dangerous, especially for the very young, the elderly, and the frail. Correspondingly, Cryptosporidiosis is most severe and long-lasting in immunocompromised individuals (whose immune systems are weak), such as people infected with HIV or AIDS, cancer patients on chemotherapy, transplant patients, or others taking medications that suppress the immune system. 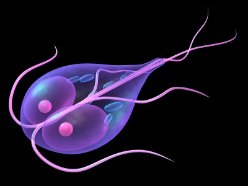 Despite drinking water standards, outbreaks of Cryptosporidiosis have become more common during the past 20 years, even in municipally-treated water systems. In 1987, some 13,000 people in Carrollton, Georgia became ill with cryptosporidiosis. This was the first report of the disease's spread through a municipal water system that met all state and federal drinking water standards. In the spring of 1993 in Milwaukee, Wisconsin, municipal drinking water, again within standards, was contaminated with Cryptosporidium. An estimated 400,000 people became ill and the disease contributed to the deaths of some AIDS patients.

Cryptosporidium oocysts have tough walls that can withstand many environmental stresses and are resistant to the chemical disinfectants such as chlorine that are traditionally used in municipal drinking water systems.

Giardia lamblia (commonly referred to as Giardia) is a single-celled microbe or protozoa. When ingested, they can cause a gastrointestinal disease called giardiasis, often referred to as "Beaver Fever". Giardiasis is a frequent cause of diarrhea. Symptoms may include diarrhea, fatigue, and cramps. Waterborne giardiasis may occur as a result of disinfection problems or inadequate filtration procedures. Giardia cysts can infect humans and other animals. 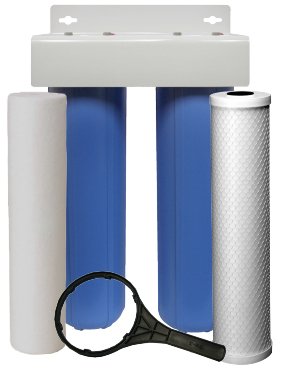 US$339.95
our best whole house filter package. It features filtration down to a level of 0.5 microns (nominal)
- More Info - 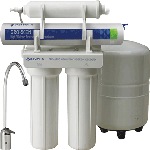 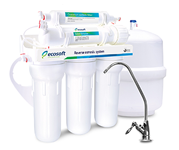 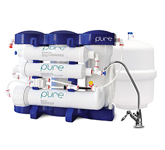