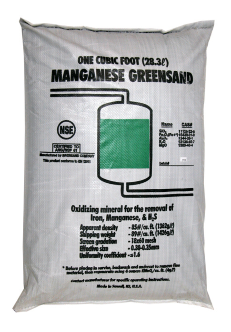 Common media used for the removal of iron, manganese, and hydrogen sulfide

Manganese greensand has been one of the most popular iron, manganese, and hydrogen sulfide treatment mediums used in the water treatment industry over the past 30 years or more. Its popularity was due to its predictable performance and reasonable price.

However, in recent years, modern media choices like Filox, Katalox Light®, and Birm® have surpassed manganese greensand in popularity. This is largely due to the fact that manganese greensand requires periodic or continuous regeneration with potassium permanganate ("Pot-Perm"), whereas these modern media do not. Potassium permanganate is a strong oxidizer and causes nasty staining - most water treatment professionals and homeowners prefer not to have to handle it.


Manganese Greensand is formulated from a glauconite greensand which is capable of reducing iron, manganese and hydrogen sulfide from water through oxidation and filtration. When the oxidizing capacity power of the manganese greensand bed is exhausted, the bed has to be regenerated with a weak potassium permanganate (KMnO4) solution thus restoring the oxidizing capacity of the bed. 1.5 to 2 ounces of potassium permanganate, in solution, per cubic foot of manganese greensand is considered sufficient for normal regeneration. It is required to vigorously backwash and regenerate the bed when it is placed in service and before its oxidation capacity is totally exhausted. Operating the bed after oxidation capacity is exhausted will reduce its service life and may cause staining.

Manganese greensand is heavier than most alternative iron removal media other than Filox and Pyrolox and other non-coated manganese-based media. Therefore, it requires high backwash flow rate and volumes.

* Bed Depth not optimal due to tank height.