Arsenic is a semi-metallic element with the chemical symbol "As." It is a member of the nitrogen family, occurs naturally in rocks and soils, and can contaminate water that comes in contact with these rocks and soils. Arsenic is odorless and tasteless. It can combine with other elements to form inorganic and organic arsenicals. In general, inorganic derivatives are regarded as more toxic than the organic forms. While food can contain both inorganic and organic arsenicals, primarily inorganic forms are present in water.

What are the effects of arsenic in water?

Exposure to arsenic at high levels poses potentially serious health effects as it is a known human carcinogen, or cancer-causing agent. It has also been reported to affect the vascular system in humans and has been associated with the development of diabetes.

Observable symptoms of arsenic poisoning are: thickening and discoloration of the skin, stomach pain, nausea, vomiting, diarrhea, numbness in hands and feet, partial paralysis, and blindness.

Well water in certain regions of the U.S. (particularly in the southwest), can exceed the Environmental Protection Agency's standards for arsenic in drinking water. Your state's Department of Natural Resources or Geological Survey Office should be able to inform you if your area is prone to the presence of high levels of arsenic. Similarly, well water in many regions of Canada is contaminated with naturally-occurring arsenic levels that exceed Health Canada's guidelines. Your local health authority can help you determine if arsenic is common in well water in your region.

How is arsenic removed from water

The most effective treatment for arsenic is adsorption using titanium dioxide media. While more effective at removing Arsenate (Pentavalent Arsenic / Arsenic 5 / Arsenic V), it is also very effective at removing Arsenite (Trivalent Arsenic / Arsenic 3 / Arsenic III). In fact, it is one of the few treatments that offer high removal rates for both primary forms of arsenic without pre-oxidation. Adsorption with titanium dioxide media is typically done on a whole-house basis. The media is relatively expensive but has a very long life if pre-treatment for heavy metals like iron and manganese is done (when these contaminants are present). Accordingly, this form of treatment is usually very successful and also cost effective.

If significant iron is present, some arsenic reduction can normally be accomplished with a traditional iron filter. This side-effect of iron treatment occurs because iron filters typically transform dissolved iron into iron hydroxide particles, which remove arsenic. Some water treatment technicians have begun using iron-based treatment media to remove arsenic, however, these systems are less effective than titanium dioxide and, due to the heavy weight of the ferric hydroxide medias, they are difficult to backwash and are prone to clogging.

If you have arsenic in your water we recommend the following arsenic water filters: 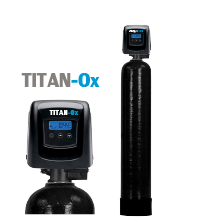 US$1,995.00
highly effective and economical treatment for the removal of arsenic, uranium, lead, and other heavy metals
- More Info -

How much arsenic is safe in water

How can arsenic get into a drinking water supply?

Arsenic is naturally found in mineral deposits in rocks and soils, and can contaminate water that it comes in contact with. Arsenic can also enter the drinking water supply through manmade sources including the discharge of industrial wastes, the burning of fossil fuels, metal production & mining, the incorrect application of pesticides and feed additives, and waste burning.

No, boiling water is not an effective treatment for arsenic in water. As the water is heated some may evaporate, actually increasing the arsenic concentration in the water.

No, according to a 2017 study done by Dartmouth College, Brita water filters do not remove arsenic.

How to test for arsenic in water?

Testing for arsenic in your water can be done either with a home arsenic test kit like the ITS Arsenic Quick II Mini Test Kit, or by taking a water sample to a certified water testing laboratory.