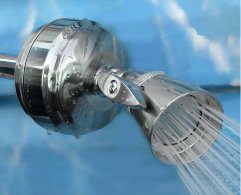 It's no secret that much of our water supply comes from polluted sources. As a result, most municipalities use chlorine to kill bacteria. High chlorine levels are not healthy for any living organism, including humans; in fact, chlorine is the primary ingredient in household bleach which is not only highly-corrosive, but is designed to kill the organisms it contacts. Unfortunately, when we shower our skin absorbs chlorine from our water supply.

Chlorine keeps water bacteria-free. But it reacts with organic material creating chloroform, trihalomethanes (TMHs) and other "chlorination disinfection by-products" (CBPs), which are all strongly linked with cancer.

A Health Canada Position Paper entitled Safe Drinking Water: A Public Health Challenge, states: "14-16% of bladder cancers may be attributable to water containing CBPs. There is an urgent need to resolve this ... In fact, given the prolonged exposure to CBPs and the epidemiologic evidence of associations with several cancer sites, future research may establish CBPs as the most important environmental carcinogens in terms of the number of attributable cancers per year." The paper links CBPs with spontaneous abortions, low sperm count, birth defects, respiratory problems and spina bifida.

Unfortunately, most people are unaware that more chlorine is absorbed through the skin during the average shower than by drinking six to eight glasses of tap water. Skin is highly permeable; it is the body's way of excreting toxins and regulating temperature. Hot showers cause the pores of the skin to dilate, allowing chlorine and other free radicals to be rapidly absorbed. Further chlorine is contained within the water vapor that enters the air as steam, and is breathed into our lungs as we shower. Furthermore, chlorine and other water contaminants reduce the effectiveness of many shampoos, conditioners, lotions, oils, and skin creams, leaving your skin dry and unnourished; not to mention money spent on quality personal care products is needlessly wasted.

The free-radical model for pathology explains increases in cancer, cardiovascular disease, chronic fatigue, dermatitis and auto-immune disease. Dr. Stephen Levine pioneered the research that found antioxidant supplements, vitamins A, C, E and selenium to be effective in combating these diseases. Dr. Levine noted he had pronounced fatigue after having a shower. Being a researcher he set out to find out what was in his shower water that would cause his profound fatigue - the answer was chlorine. Chlorine was discovered to be a free radical and as such was responsible for his fatigue.

The environment we live in makes it difficult to prevent the absorption of all free radicals from entering our body, but we must try to eliminate all those that we can. The use of a simple inline shower filter can eliminate more than ninety percent of the chlorine and other harmful residue in your tap water. If you have the option, a whole house water filter containing granulated activated carbon (GAC) or carbon block would be an excellent treatment option. If not, an alternative solution would be to drink filtered water and put a shower filter on all household showers.

The April Shower water filter removes chlorine and other contaminants from your shower water.