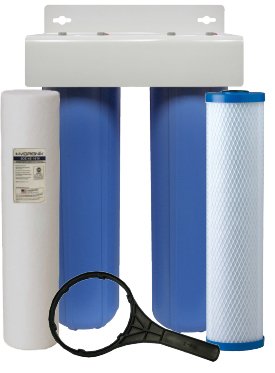 While pesticides constitute a relatively small portion of the total synthetic organic compounds that contaminate our water supplies, the serious health consequences they cause warrant our attention.

Two factors have influenced the increasing incidence of pesticide contamination being detected in our water supplies. The first is the increasing use of organic pesticides over the past 50 years. Between 1950 and 1980 production of synthetic organic pesticides more than tripled in the United States to over 1.4 billion pounds. To date, more than twenty types of pesticides have been detected in U.S. wells, and it is believed that nearly one hundred have the potential to invade our water systems based on their chemical characteristics. Areas with shallow water tables, sandy soils, and where agriculture is intensive are more prone to contamination. Some level of pesticide contamination has been detected in every state and province on the continent. Secondly, laboratory tests have become much more effective at detecting low levels of contamination.

The health effects of pesticides and the likelihood that they will enter our water systems depend upon their chemical characteristics.

Before the 1940s most pesticides were primarily compounds of arsenic, mercury, copper, or lead. Although these compounds may have made their ways into drinking water, they were not highly soluble, and the residues ingested in foods were of far greater concern.

Synthetic organic pesticides were introduced during World War II and were mistakenly thought to be both safer and more effective. Pesticides in this group include chlorinated hydrocarbons such as DDT, aldrin, dieldrin, chlordane, heptachlor, lindane, endrin, and toxaphene. Because of their low solubility in water and their strong tendency to chemically attach to soil particles, these compounds have rarely contaminated groundwater, and are more frequently found to contaminate surface waterways. Use of most of the chlorinated hydrocarbon pesticides has been restricted or banned due to their toxic effects and concerns over their long-term accumulation in the environment.

Another group or pesticides that have replaced chlorinated hydrocarbons are carbamate pesticides including aldicarb, carbofuran, and oxamyl. These compounds tend to be soluble in water and are only weakly adsorbed by soil. Consequently, if not degraded in the upper soil layers, they have a tendency to migrate into groundwater.

While these more modern pesticides are found less frequently than chlorinated hydrocarbon pesticides in our groundwater, they can both be found in surface water sources where many municipalities and private water systems get their water supplies. Further, it is important to note that while chlorinated hydrocarbon based pesticides are regulated much more closely than they once were, they remain a threat since many decompose very slowly and may contaminate soils for very long periods. Chlordane, a highly persistent pesticide, was commonly used for termite treatments until it was banned in 1989. It can still be found in drinking water in many regions.

Studies of the health effects of pesticides on humans focus on two aspects; the acute toxicity or immediate effects resulting from short-term exposure, and the chronic toxicity or effects resulting from more-prolonged exposure. When pesticides are found in water supplies, they normally are not present in high enough concentrations to cause acute health effects such as chemical burns, nausea, or convulsions. Rather, they typically occur at trace levels, and the concern is primarily for their potential for causing chronic health problems such as organ failure (esp. liver, kidneys), nervous system disorders, birth defects, and/or cancer.

Pesticides by definition are toxic to at least some forms of life. The specific health effects of exposure depend upon concentrations, capacity to be absorbed by the body, how quickly compounds are metabolized and excreted from the body, and other factors. Drinking water guidelines are aimed at keeping pesticides at levels below those that are considered to cause any health effects in humans, however, because the exact level at which exposure to a pesticide actually causes an adverse health affect is unknown, it is advisable to avoid pesticide exposure whenever possible, whether it being in your environment, food, or water.

Many pesticides can be removed from water by filters containing activated carbon. Coconut shell derived carbons tend to produce the highest removal rates for pesticides and VOCs.

We recommend the following water treatment systems for pesticides: