If your household water or well water is contaminated with iron and/or manganese, chances are you will know it. Rust colored stains on your fixtures and clothing, bad tasting and/or smelling water, and maybe even sludge growing in your toilet tank can all be signs that you have a problem with iron and/or manganese in one form or another. Regulatory bodies who deal with water issues classify iron and manganese as "secondary" contaminants - those that do not pose a direct health risk, but instead create esthetic problems due to unpleasant odors, tastes, and colors, etc.

Elevated levels of iron and manganese can affect the flavor and color of water and the food that is cooked in it. They will react with the tannins in tea, coffee and some alcoholic beverages to product a black sludge that will affect both the taste and appearance of these beverages.

Iron will often cause yellow to reddish-brown staining of laundry, porcelain, dishes, utensils and glassware. Manganese will cause similar problems, but results in brownish-black staining. These stains are difficult to remove with common cleaners, and bleach and alkaline cleaners can actually intensify them.

Iron and manganese can build up in pipes, pressure tanks, water heaters and water softeners - decreasing the available water pressure and increasing the cost of operating these appliances.

Iron or manganese bacteria can also cause problems in your household. While these bacteria pose no direct threat to health, they do produce a red-brown (iron) or black-brown (manganese) slime that can accumulate in toilet tanks, pipes or other appliances and clog your water system. Another unpleasant side-effect of the presence of iron/manganese bacteria is that they often create hydrogen sulfide as a by-product - giving water an unpleasant "rotten egg" odor.

Types of Iron and Manganese that Contaminate Water

There are different varieties of iron and manganese that can be present in your household water supply. Each of these types must be considered separately, as treatment will be different for each. It should be noted that manganese is also common in residential water supplies and is usually found in conjunction with iron. It is found in the same forms as iron, and generally treated using the same methods.

This is the most common type of iron (and manganese) found in domestic water sources. It is also called "clear water iron", because when it comes out of the tap, the water will look clear and clean (not discolored as it will with insoluble iron or manganese). If you leave the glass of water for 20 minutes to an hour, however, you will notice a colored precipitate which will eventually settle on the bottom. This is the iron and/or manganese turning back into its insoluble form after coming into contact with oxygen in the air.

Ferric iron is simply iron that has already oxidized (rusted) - it can be readily seen due to the discoloration of the water or due the presence of tiny granules of "rust" in the water. Although not as common as its soluble counterpart, insoluble iron can cause serious problems to those who are afflicted with it. ** Soluble and insoluble iron can often both be found together in a given water sample.

As previously mentioned, iron or manganese bacteria are commonly present in water supplies with large concentrations of iron, manganese or sometimes calcium present. These bacteria feed on iron or manganese in the water (and in iron pipes, etc.) and produce reddish brown, yellowish or black-brown (with manganese) slime that accumulates in toilet tanks and in water pipes and appliances. This offensive sludge can also create hydrogen sulfide, a compound that gives water an unpleasant "rotten egg" odor that must be dealt with.

If you suspect that you have a problem with iron or manganese in your household water, your first step is to have the water tested. Test results should let you know the extent of your iron problem, types of contaminants present, quantities in which those contaminants are present, pH, alkalinity and hardness. Once you have this information, you can begin to work out the best way to treat your problem.

There are a variety of methods available to treat iron and manganese problems. The most effective means in most circumstances is oxidation / filtration. This method is best employed where the combined concentration of iron and manganese is less than 10 mg/l, although higher levels can be treated under the right operating conditions. Common oxidizing agents include chlorine, hydrogen peroxide, and air, including dissolved oxygen found in or added to the water to be treated. Essentially, the oxidizing agent causes rapid oxidation or "rusting" of the dissolved iron and manganese causing it to precipitate out of the water and turn into a solid particle. The particle is then mechanically filtered out of the water. We generally recommend air as an oxidizing agent because it does not add any unhealthy chemicals to your water (unlike chlorine, for example). A catalyst media such as Birm, Filox, or Iron Rival Light can be used to enhance the oxidation process. Most iron filters use a treatment tank similar to a water softener that contains the catalyst and filtration media. The system is controlled by an electronic valve that regulates a periodic backwash process. Alternatively, where iron levels are below 5ppm (mg/l), we offer a unique cartridge-style iron filter which offers a very economical price, excellent performance, and more convenience (no backwashing or media-regeneration required!).

We recommend the following water treatment systems for the removal of iron and manganese: 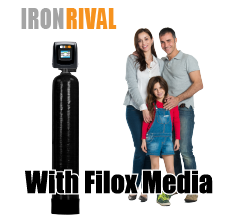 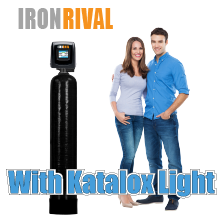 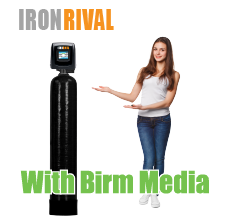