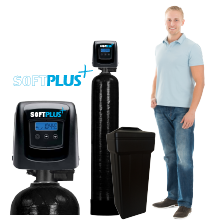 Starting at US$943.00
economical high-efficiency water softeners for a wide range of applications including cabins, residential homes, and light commercial applications 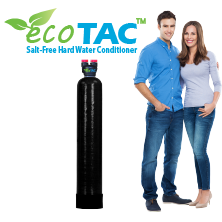 Starting at US$679.00
innovative salt-free solution to ptotect your home and applainces from hard water scale

Hard Water & How to Treat It

A very large percentage of homes in Canada and the United States have hard water. It is a widespread problem and yet many are not aware of what it really is and how it can be treated.

What is hard water?

Simply stated, hard water is water with a high concentration of dissolved minerals, most commonly calcium and magnesium. These minerals react with other minerals in the water to form a hard white mineral scale.

How do I know if I have hard water?

Hard water can be a terrible nuisance in household applications. The colors of your garments will fade, and clothing fibres will be damaged, decreasing wearing life. Hard water can leave unsightly coatings on your dishes, shower doors, walls, bathtubs, sinks and fixtures. If you have a hard water problem it can interfere with almost every cleaning task - from washing yourself and your hair to washing clothes and dishes. Soaps and detergents will not lather and will often not be effective.

While there are plenty of signs that your water might be hard, the best way to know for sure is to have it tested. Water testing labs are found in most regions and you can find out more about them through your local municipal water authority. Once you have had your water tested, you can use the following chart to determine the degree of your hardness problem.

Water that has a hardness reading of 7 GPG or 120 PPM (hard) or higher would benefit from treatment.

What are the risks associated with hard water?

There are no real health risks associated with hard water, in fact the minerals in the water may be of some benefit to those who are deficient. That said, treating water with a hardness level of 7 or greater can result in greater convenience and significant cost savings.


How do I treat hard water?

There are several options available to those wishing to treat hard water:

This is the traditional style of water softener that most people are aware of. Ion exchange softening generally involves exchanging sodium or potassium ions for the hardness-causing minerals - calcium and magnesium. Ion exchange units are the typical, tried-and-true water softeners that you will see used in most applications.

Beads are regenerated through brining, or being soaked in a solution of water and sodium chloride (salt). While the beads are soaking in the brine, the calcium and magnesium ions are stripped from them and replaced with sodium ions, and the whole process can begin again.

Traditional water softeners will have a large salt holding or "brine" tank, which must be kept full of salt. This reservoir is where the mechanism draws the brine for the regular flushing of the ion exchange beads. Most softeners will have either a manual mechanism to initiate a flushing cycle, or an electronic timer, flow meter, or sensor-type system that will do the same thing.

Ion exchange is the most common technology used in household applications. While maintenance, ongoing operating costs and increased sodium in the water (which can be an issue for those who must observe a reduced sodium diet) are drawbacks, ion exchange is a simple, effective and safe solution to hard water woes.

Template Assisted Crystallization or TAC for short has emerged as the leading salt-free hard water conditioner technology on the market. TAC does not remove the minerals responsible hard water like a conventional water softener, but rather works by acting as a catalyst for the formation of stable hardness crystals that do not readily stick to surfaces. Considerable independent testing of the technology has been done, including a study conducted in 2011 by Arizona State University entitled, "Evaluation of Alternatives to Domestic Ion Exchange Water Softeners." The study determined that TAC technology was the most effective of all non-salt water conditioners at preventing mineral scale, with reduction levels consistently in excess of 90%. The results showed that TAC conditioners were far more effective than magnetic and electronic water conditioners at preventing hard water scale formation.

Unlike conventional water softeners, TAC systems do not require backwash or regeneration with salt so they are regarded as being more environmentally friendly.

Generally, polyphosphate feeders are effective in low volume, cold water applications. The polyphosphate dissolves into the water and coats the iron, calcium and magnesium in it, making it impossible for these agents to precipitate out of the water and create the problems associated with hard water.

Polyphosphate crystals are placed within a housing and as water flows through it, the crystals dissolve.

Polyphosphate is also available in a more traditional filter. These filters are effective for relatively small quantities of water, and are commonly used in low volume applications such as refrigerator ice makers, etc.

Unfortunately, polyphosphate-type systems are only effective in cold water, low volume applications. It should also be noted that phosphates are a preferred "food" for bacteria - so if bacterial contamination is a concern (in private, non-chlorinated water supplies, for example) you may want to reconsider using a polyphosphate system.

These products are very controversial in the water softening marketplace. While supporters remind us that these systems have been working in large-scale applications in Europe for decades, skeptics point out a lack of scientific evidence that they actually work.

The concept is fairly simple. An energy field is created and the water is allowed to flow through it. As the water flows through the field, the structures of the hardness agents are altered so that they are not able to precipitate into the limescale that is associated with hard water. Because they cannot precipitate and attach to fixtures, bodies, or possessions, they pass harmlessly down the drain.

We have tested a number of brands of electronic conditioners and have failed to find one that offers consistent satisfactory scale reduction in the residential applications that we tested.